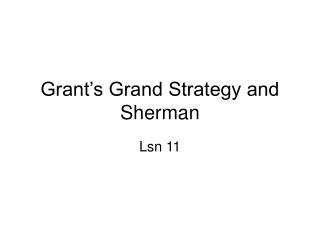 Grant’s Grand Strategy and Sherman. Lsn 11. Unity of Command. From Manassas to Chattanooga, the Federals had fought without a grand strategy or a supreme field commander Twin, uncoordinated victories at Vicksburg and Gettysburg demonstrated the problem

Cindy Sherman - . t he portrait as

Ulysses S. Grant - . american warrior, american president, american hero. at the end of the civil war, who was the most

Grant, Sherman, and Appomattox - . nearing the end!. confederacy is down for the count…. no food no money angry

Ulysses S. Grant - . grant was an unlikely hero. he never wonted to be a solider but he went to west point anyway. grant

Ulysses S. Grant - . the butcher: a tainted memory of a military hero by cecilia ware. before the war. born april 27,

Ulysses S. Grant - . by lillian stubbs. birth. things that happened at birth was born in pleasant point ohio was born on

Grand Strategy - . what is grand strategy?. this is the choices a government makes to apply economic, military,