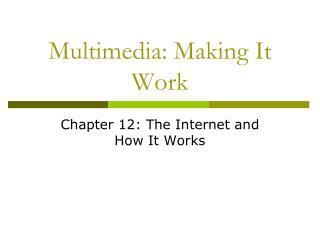 Multimedia - . first rule. multimedia is a vehicle for communication . before you work on a multimedia project— whether

Sound Design, Music, and Recording - . cs 5964. no one will listen to a bad recording, no matter how pretty the pictures.

CGMB113:Multimedia Technologies - . chapter 1: introduction to multimedia. objectives. at the end of this chapter,

Multimedia Project Proposal - . introduction objectives of the proposal what should a proposal contain description of

Multimedia: Making It Work - . chapter 1: what is multimedia?. overview. introduction to multimedia. applications of

Making Multimedia Skills and Training Chapter 2 &amp; 3 - . by john sullivan spring 2003. the stages of a project.