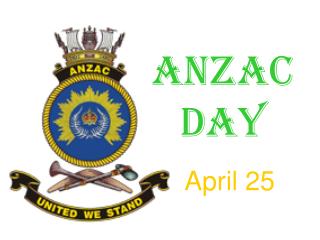 ANZAC DAY. April 25. What is ANZAC?. ANZAC = A ustralia and N ew Z ealand A rmy C orps. What is ANZAC DAY?. On 25 April 1915 Australia and New Zealand were at war. Along with the Allies the ANZACs were fighting against the Central Powers.

National Employment Law Council April 25, 2013 - . the journey from legal technician to trusted advisor: pick up your

Welcome Associates to Lunch with Paula Deen Thursday, April 25, 2013 - . thank you for all you do for st. john providence