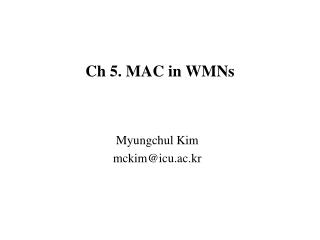 Ch.5 Interactions in Ecosystems - What is an ecosystem?. main

Ch # 5 - . atoms, molecule, formulas, subatomic particles. atoms. an atom is the smallest particle of an element that can

Supply Ch. 5 - . profit is the determining factor of supply. a business is only open as long as it can make a profit,

Ch. 5 - Subject verb agreement . ch. 5. agreement of subject and verb. a verb should agree in number with its subject.

TE-5 Mac Lab - . changes which will be in effect for te-5 beginning with the fall 2013 semester. includes information

Ch 5 Economics - . supply. to earn an “a” on notes:. you must do all of the following: have a complete set of notes:

Ch. 5 Evolution - . apes mrs. sealy. i. origins of life. how do we know? chemical analysis: chemists have conducted lab