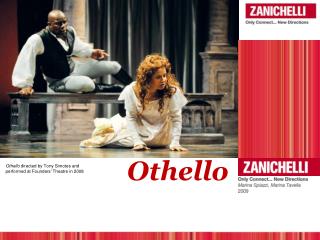 Othello. Othello directed by Tony Simotes and performed at Founders' Theatre in 2008. Othello. 1. The source of Othello. Othello is based on a 1565 story by the Italian Giraldi Cinthio. SHAKESPEARE. CINTHIO. OTHELLO. A character with great qualities as a man and caught in a trap

OTHELLO PLAY MAP - . he loves – they elope. duke sends othello to cyprus. othello the moor. brabantio a senator. he

Introduction To Othello By William Shakespeare - . why do we study othello? what makes a great piece of literature?

Othello Webquest - . mr. czarnecki. a brief history: elizabethan england. who was queen of england during the time

Shakespeare’s othello - . a tale of love, tragedy, and deceit . handkerchief: . shakespeare?!?!. i know what you all

Act IV, Scene ii - . throughout the discussion with othello, desdemona still does understand the problem; finally,