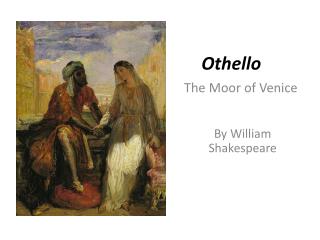 Othello. By William Shakespeare. The Moor of Venice. Written in 1603. Set in Venice and Cypress. Venice . Cyprus. The Moors. Descriptive term, not cultural. OTHELLO - . shakespeare script, stage and screen by bevington , welsh and greenwald. othello is unique among

Othello by William Shakespeare - . othello is a moor—an african american he falls in love with desdemona—a venetian,

Othello the Moor of Venice - . critical focus on act 4 scenes 1, and 2 . character of othello? estimating a character / a

Black and white - . symbolism in othello. othello and iago ironic comparison and contrast othello: black inside but white

The Tragedy of Othello - . a discussion of renaissance racial identity, gender , and what it means to be a sociopath.

Intro to Othello - . the moors the world of othello

An Introduction to Othello - . mrs. shean. setting: venice. venice because of its location, venice was known for its