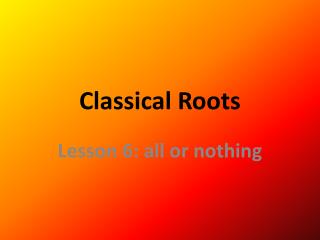 Sum and Product Roots - . lesson 6-5. the sum and the product roots theorem. in a quadratic whose leading coefficient is

Roots and Affixes - . how words are created. vocabulary. (n.) body of words used in a particular language english

Roots - Word derivations. roots. english vocabulary includes short words like the article a as well as longer words such

ROOTS!! - . the place where the journey begins. there are 4 jobs that roots do:. anchor the tree failed before the roots.

Building Vocabulary from Word Roots - . lesson 10 latin and greek bases p an(t) and omni. omni and pan(t). the latin base