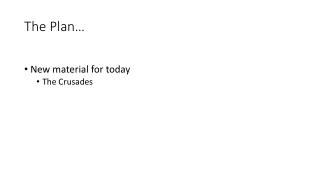 The Plan - . the year in review the big picture short term plan &amp; balloon manpower issues. just over a year on

The Plan - . a trinity at work: a one year plan. teachers working together: the starting point. . collaboration is the

The Plan… - . start the next unit: the renaissance p.209 in your textbook.

the plan - The analysis of mergers: some observations p.a. geroski, london business school and the competition commission