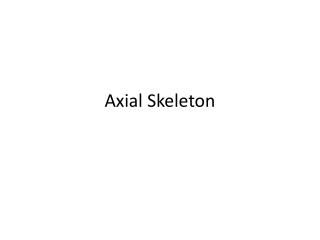 Axial Skeleton. axial skeleton diagram. The skeleton is divided into 2 parts, the axial and appendicular skeletons. The axial skeleton, which forms the longitudinal axis of the body. It can be divided into three parts: the skull, the vertebral column, and the bony thorax. Skull.

Axial Members - . worksheet 11. to answer just click on the button or image related to the answer. let's go !!.

Axial skeleton - . notochord, vertebral column, median fins, ribs, sternum where do these tissues come from in the