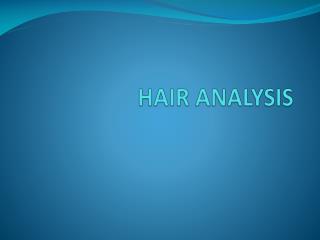 HAIR ANALYSIS. Hair. Hair grows from a hair follicle The parts of a hair include the bulb, root, and shaft The bulb is an expansion at the end of the hair from which the rest of the hair grows The root of the hair is the part of the hair that is embedded in the skin Hair Analysis - So really, what can we find out from hair?. hair analysis. hair can be very valuable to forensic

Hair Analysis - . uses. most often in forensics, comparison tests are done to identify similarities with victims. other

Hair Analysis - . identification of species through microscopy. collection of hair specimen. examination of the medulla.

Hair Analysis - . information from hair evidence. hair is considered class evidence…can’t be used to identify a

hair analysis - What is hair analysis? learn how to nutritionally balance your mineral deficiencies and find heavy metal

Forensic Hair Analysis - . introduction. a hair without the follicle and its nuclear dna cannot provide individual

Forensic Analysis of Hair - Hair in forensics . it is important to note that it is impossible for experts to

Forensics of Hair Analysis - . hair forensics. one of the most common is hair evidence. helpful in demonstrating physical

Forensic Analysis of Hair - . introduction. human hair is one of the most frequently found pieces of evidence at the

Forensics of Hair Analysis - . objectives. after studying this chapter you should be able to: recognize and understand

Hair and Fiber Analysis - . hair and fibers an help police identify if the hair belongs to a human or animal. hair can

Hair and Fiber Analysis - . morphology of hair. part of integumentary system grows out of hair follicle hair consists of