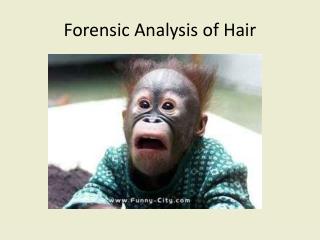 Forensic Analysis of Hair. Introduction. Human hair is one of the most frequently found pieces of evidence at the scene of a violent crime. It can provide a link between the criminal and the crime. From hair, one can determine: If the source is human or animal Race (sometimes)

Hair Analysis and Species Recognition - . hair and fiber 2. forensic importance of non-human hair. can link a suspect or

April 30, 2013 Positive Attitude Peccadillo: a slight offense or fault; a minor sin Do Now: - What is hair? what can

Hair Analysis - . identification of species through microscopy. collection of hair specimen. examination of the medulla.

Students will be able to: - . hair analysis. describe the structure of a hair explain the difference between human and

Chapter 5: Hair - . “for three days after death, hair and fingernails continue to grow but phone calls taper off.”

Hair and Fiber Analysis - . morphology of hair. part of integumentary system grows out of hair follicle hair consists of

Chapter 3 THE STUDY OF HAIR - . sept. 3, 2013. trichology. the scientific study of the structure, function, and diseases

Chapter 5: Hair - . “for three days after death, hair and fingernails continue to grow but phone calls taper off.”