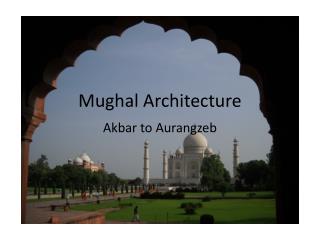 Mughal Artwork - . typical islamic artwork from the mughal period. from the beautifully decorated mosque of wazir khan in

The Mughal Empire in India - . chapter 18: section 3. the origin of the mughal empire. during the 1300’s turkish

Mughal Empire - . early history of the mughals. 8 th century begins with bloody clash between the hindus and muslims in

The Mughal Empire - . objectives for today's class: trace the mughal conquest of india. review the basic beliefs of

Mughal Empire - . the third, and final gunpowder empire. origins and babur. descendents of the mongols mixed with culture

Taj Mahal - . some facts. world heritage site since 1982 on the 1996 watch list it incorporates elements of persian,

Mughal Empire in the Early Modern Period - . devin,dan,and patrick. important points to be covered. who: who were the

TAJ MAHAL - . a wonder of the world. the cause of the taj mughal empress mumtaz mahal. taj mahal . a symbol of eternal