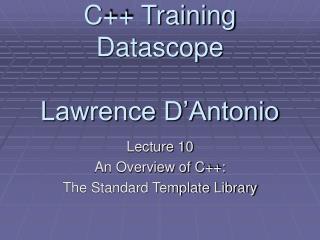 C++ Training Datascope Lawrence D’Antonio. Lecture 10 An Overview of C++: The Standard Template Library. Why Should You Learn STL?. STL is generic. It involves data structures and algorithms that are designed to work on as wide a range of data types as possible. C++ Training Datascope Lawrence D’Antonio - . lecture 9 an overview of c++: what is typing?. type systems. “the

PPT Presentation on ISO 14001 Training - This publication is about revised iso 14001 ppt presentation. in which it covers