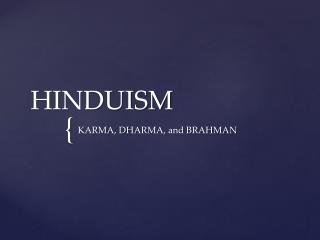 HINDUISM. KARMA, DHARMA, and BRAHMAN. FROM THE WATER ACTIVITY: ATMAN SAMASARA MOKSHA MAYA. Important Terms!. The foundational belief in Hinduism is that humans are born again and again to lives of varied fortune in a course controlled by the moral quality of their accumulated deeds. Hinduism and Buddhism Develop - . hinduism evolves over centuries. hinduism is a collection of religious beliefs that

Hinduism and its beliefs - . by: sheershika jayasim 6b . how, where and when did hinduism originate?. hinduism is an

Hinduism &amp; Buddhism - . leq’s …. how are hinduism and buddhism similar? how are the two different? how do

hinduism - . chapter 4, section 2. the story of hinduism - youtube. hinduism. hinduism had no founder! it is practiced

Hinduism &amp; Buddhism - . in your bellwork journal, write down everything you remember about hinduism and buddhism.

Hinduism &amp; Jainism - . percentage of hindus in world today. the evolution of hinduism. the roots of hinduism are

Hinduism - . what do i know? what do i want to know? page 21 in your religion notebook. facts and stats. hinduism

Hinduism - . thai studies - religion in thailand. facts about hinduism. hinduism is the oldest surviving religion of the

HINDUISM - . “ hinduism is as much a way of life, as it is a religion. ”. general. hinduism is one of the world’s