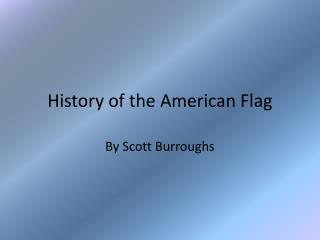 History of the American Flag

History of the American Flag. By Scott Burroughs. History of Flags. Flags were initially used as a means of battlefield identification They later began to be used for long distance communication

History of the American Flag

Flag History - In 1194 a.d., richard i of england introduced the cross of st. george, a red cross on a white ground, as

I pledge allegiance to the flag of the United States of America - And to the republic for which it stands, one nation

The American Flag - Explain two historical facts about the american flag outline the steps to hoist &amp; lower the

The United State Flags - . indiana flag history the flag was adopted on may 31, 1917. indiana is the19th state of the

Flags from Around the United States - . cambridge flag. it is the first true u.s. flag. it combines the british flag

Courtesies to the Flag and the Pledge of allegiance - Professional military education initial entry training. courtesies

Our American Flag - . see how we grew. “betsy ross” flag 1776. legend betsy ross was visited by a committee of the

The American Flag - . by dylan hoang. flags. when you see a flag on the floor pick it up clean the flag so it won’t be

Symbols of Patriotism in America - . a virtual field trip for kindergarten. symbols of america. click “play” to watch

By: Courtney Witmer MSTI 131 Introduction to Educational Technology February 7, 2008 - The history of. the. american