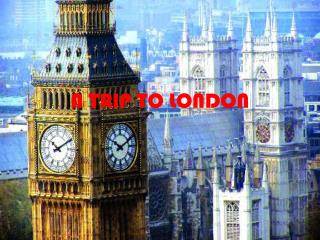 A TRIP TO LONDON. Close your eyes, think about London and try to imagine it in your mind. Describe what you “saw” in your mind. What things do you associate with London? Make a list of your favourite places in London Which one do you like best? Why?. A Trip to London - . why do people travel?. to study foreign languages to make friends to go sightseeing to learn about

A Trip to London - . the plan of the lesson. revising new words for today’s theme. reading  listening to the texts.

A trip to London - . tasks. getting information deciding on transport finding accommodation setting up the programme.

TRIP TO LONDON - Travel to london. trip to london. w e left on april 22 at 7:oo pm from tenerife airport. we arrived

TRIP to LONDON - . all you need to know…. by teresa gonzalez primero bachillerato. curr ency. british currency is the

My trip to London

London Trip - . may 2 nd to may 4th. what am i going to cover. the basics the itinerary a kit list the rules questions .

My trip to London England - . by yu-jo chang. why london?. visited a friend the metropolis architecture royal