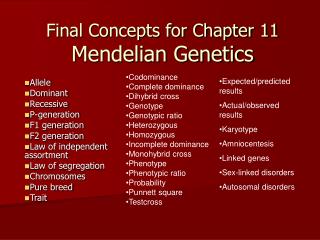 Chapter 11 Analysis Concepts and Principles - . introduction: what are the real problems?. the customer has only a vague

Mendelian Patterns of Inheritance - . mono- and di- hybrid crosses. two black mice are bred together. over the course of

Patterns of Inheritance - . chapter 12. early ideas of heredity. before the 20 th century, 2 concepts were the basis for

11-3 Exploring Mendelian Genetics - . key concepts: what is the principle of independent assortment? what inheritance

Chapter 11 (Part 2) - . punnett squares honors genetics ms. gaynor. what is “probability”?. why did mendel get his