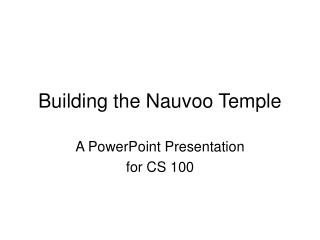 Building the Nauvoo Temple. A PowerPoint Presentation for CS 100. Why Temples?. Turing Machines (11.5) Longin Jan Latecki Temple University - . based on slides by costas busch from the course

Data Hiding in Encrypted H.264/AVC Video Streams - Digital video sometimes needs to be stored and processed in an

Finite-State Machines with No Output Longin Jan Latecki Temple University - Based on slides by elsa l gunter, njit, and