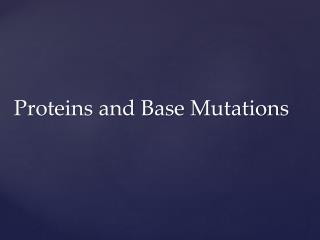 Proteins and Base Mutations Proteins and Base Mutations. Polypeptides made up of amino acids Peptides are at Least 2 amino acids bonded together via peptide bonds Proteins ARE polypeptides, numerous amino acids.

Proteins and Base Mutations

The Genetic Code, Mutations, and Translation - . lecture 5. overview of translation the second stage in gene expression

Denaturation of Proteins - . what is denaturation?. when the unique 3-d structure of proteins is destroyed. it leads to

Heller’s ring test - . to study the property of denaturation of proteins. objective:. to detect the properties of

CARE VALUE BASE - . what are care values?. care values. are beliefs about the right ways to treat patients or clients

Mutations - . what are mutations?. changes in the nucleotide sequence of dna may occur in somatic cells (body cells) may

Base :The function of the film base is to support the emulsion. - X-ray film composition x-ray film has two principal

Amino Acids, Peptides, and Proteins - . proteins occur in every living organism are of many different types have many

14.4 Gene Mutations - . what is a mutation?. a mutation is any change in the amount or structure of the dna of an