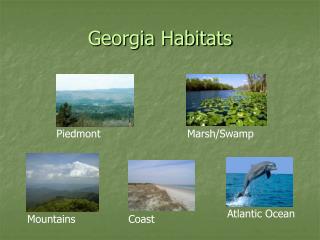 Georgia Habitats. Piedmont. Marsh/Swamp. Atlantic Ocean. Mountains. Coast. Georgia Habitats. The information on this slideshow will allow students to: Differentiate among the habitats of Georgia and the organisms that live in each one

Georgia Regions and Habitats - . created by kristi dawdy sharon elementary 3 rd grade. before we get started, where in

Habitats - . where people, animals and plants live. deserts. desert habitats are very dry. they are full of animals and

Brittney Goldberg - Habitats in our world. brittney goldberg. about habitats. definition--&gt; the natural

Habitats - . by mrs. hicks. what is a habitat?. a habitat is any place where organisms live together naturally. it is

Georgia O’Keeffe - . by laila iswaisi. georgia o'keeffe. georgia has made different types of art as she travels around

Aquatic Habitats Approx. 75% of Earth’s surface is water! This is the aquatic biome. - Aquatic habitats approx. 75% of

Connecting People to the Sea How Social Marketing and Mascots Work Across Habitats - . 151 completed campaigns in 51

Georgia Studies - . unit 1: geography of georgia/georgia’s beginnings lesson 1: where in the world is georgia? study