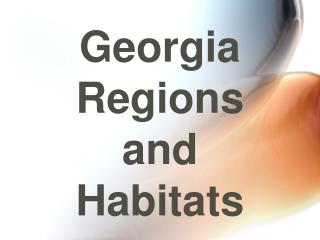 Georgia Regions and Habitats. Before we get started, where in the world is Georgia? Do you know?. Georgia is in the Southeastern part of the United States, on the continent of North America. There it is!.

Georgia Habitats - . the georgia piedmont is between the mountains and the plains. known for weathered and nutrient poor

Habitats: Life in a Polar Region - . what do polar region habitats look like?. much of the land is covered by snow and

My Georgia Regions - . by: braxton aylor. piedmont. we live here in the piedmont. there are a lot of rolling hills. the

Habitats Are Everywhere - . by: cara edenfield g roupbygroup.wordpress.com. a tiger’s habitat is in the forest.

Regions and Autonomous Republics of Georgia - . georgia is divided into 9 regions, 1 independent city (tbilisi), and 2

Habitats and Adaptations - . how do adaptations help living things survive in different habitats? .

Habitats and Environment - . chapter 9. week 8: habitats and environment. learning outcomes by the end of this week, you

Warm-Up - Geographic regions of georgia. ss8g1 the student will describe georgia with regard to physical features and

Conservation Habits = Healthy Habitats - . conservation poster/essay contest 2009-10. what is a habitat?. name some

Habitats - . definition: types of places where specific kinds of plants and animals live. within biomes, a variety of

Geographic Regions of Georgia - . ss8g1 the student will describe georgia with regard to physical features and location.

The 5 Regions of Georgia! - . by: jake and scott schaffer periods 2 and 7 mrs. stephens. coastal plains. vegetation –