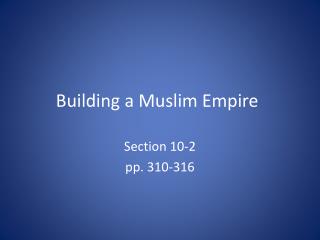 Building a Muslim Empire . Section 10-2 pp. 310-316. Early Challenges to Islam . Arabs Unite Under Islam Abu Bakr was chosen as the first caliph Forced to fight to gain loyalty from some Muslims United Muslims expanded their empire and converted remaining Arab tribes to Islam .

Building a Muslim Empire - . can it be done after the death of muhammad?. early challenges to islam. muhammad dies

Empire State Building - . by: jacob kemper 7a. name and location. the name of the structure i chose for this project is

The Empire State Building - . by: james greene and cory balderson. the building. the building was designed by gregory

The Building Up a Great Empire - By: adolfo izaquirre , carlos varela, gabriela casanova, marianne loewemberg and

The Moslem (Muslim) Empire - . the religion of islam. the five pillars the quran- religious text. fasting during the

ISLAM AND THE MUSLIM EMPIRE - . islam. a monotheistic religion ; belief in one god. islam started in the middle east in

Building an Empire - Unit 6. building an empire. the monroe doctrine (1821). russia was expanding into the americas spain

Exploration to Empire Building - . review. empire: a group of territories or nations ruled by a single ruler or

Muslim Empires – Beginnings of an Empire - . islam gradually spread through the areas muslims conquered , via

The Empire State Building - . academic decathlon 5 th period. visual analysis. this building not only became an icon of