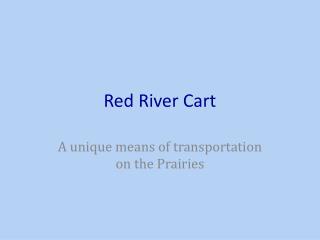 Red River Cart . A unique means of transportation on the Prairies . The Red River Cart. The Red River cart was constructed entirely from wood and tied together with leather. This made it easy to repair with trees found en route and the cart could easily adapt to the prairie elements. . The Red River Rebellion - . background – red river settlement. red river rebellion is the name given to the events

The Red River Resistance - . louis riel and the metis . riel. hero? traitor? you will be able to form your own

THE RED RIVER REBELLION - . instructions. read pgs 6-8 in the booklet titled: the development of western canada do not

The Red River Colony - . from exploration to settlement. fur trading forts in the area. area of assiniboia hbc: : ft