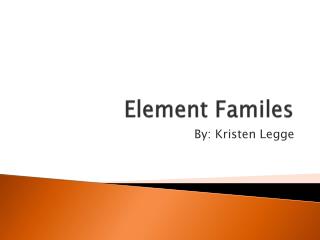 Element Familes. By: Kristen Legge. Hydrogen H. Is a non-metal, and is in it’s own family. It is the lightest Element in the universe, and is also the most abundant. It’s very reactive, because it has 1 valence electron.

Periodic Table Families Project - . family album. for this project, your group will be assigned a family from the

Families on the Periodic Table - . elements on the periodic table can be grouped into families bases on their chemical

The Periodic Table of Elements - . dmitri mendeleev published the first periodic table in 1869 made it possible for

The Periodic Table - . all of the matter in the universe is made up of the 118 elements on the periodic table. the

Coloring the Periodic Table Families - . some images are from www.chem4kids.com www.middleschoolscience.com 2008 .

Full declaration - . when an element is declared to have element content, the children element types must also be