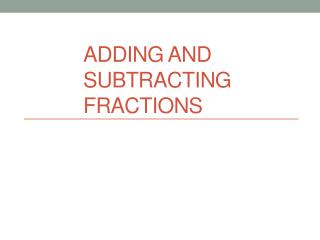 Adding and Subtracting Fractions. NS 2.1 Solve problems involving addition, subtraction , multiplication, and division of positive fractions and explain why a particular operation was used for a given situation. Algebra—Chapter 10 - . polynomials and factoring. section 10.1—adding and subtracting polynomials. standard form of a

Fractions An Acrostic Poem - . by kaylee moore. f. “f” is for fun fractions. r. “r” is for relative of decimals.

Fractions Workshop Marie Hirst - . have a go at the fraction hunt on your table while you are waiting!. objectives.

Fractions! - . fractions. a fraction is a number that represents a part of a whole. fractions are useful whenever you