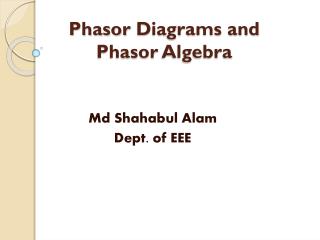 Sinusoidal Response of RC Circuits - . when both resistance and capacitance are in a series circuit, the phase angle

Phasors - . a phasor is a complex number that represents the magnitude and phase of a sinusoid:. complex exponentials. a

Chapter 12 Three Phase Circuits - . chapter objectives: be familiar with different three-phase configurations and how to