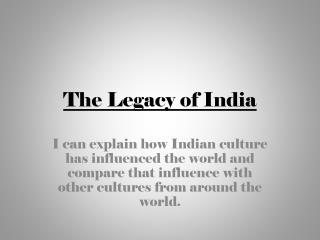 The Legacy of India

The Legacy of India. I can explain how Indian culture has influenced the world and compare that influence with other cultures from around the world. What is a LEGACY?.

The Legacy of India

The Legacies &amp; Influences of Ancient Greece - . what is a legacy?. traditions, skills and knowledge of a culture

Indian Independence Movement - . what methods did gandhi use and were his methods successful?. rise of indian

34.1 Indian Subcontinent Achieves Freedom - . new nations emerge from the british colony of india. a movement toward

200 - Geography and indian life. the origins of hinduism. buddhism and india’s golden age. the legacy of india.

The Indian Independence Movement, to 1947 - . the land and the people . despite periodic famines due to drought,