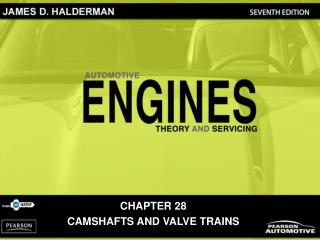 CHAPTER 28 CAMSHAFTS AND VALVE TRAINS. OBJECTIVES. After studying Chapter 28, the reader should be able to: Prepare for the ASE Engine Repair (A1) certification test content area “B” (Cylinder Head and Valve Train Diagnosis and Repair). Describe how the camshaft and valve train function.

CHAPTER 26 CYLINDER HEAD AND VALVEGUIDE SERVICE - . objectives. after studying chapter 26, the reader should be able to:

VARIABLE VALVE TIMING INTELLIGENT SYSTEM - . what is vvt ?. variable valve timing (vvt) ,is a generic term for an

Aortic Valve &amp; Aorta - . aortic valve area (ava). planimetry planimetry is the tracing out of the opening of the

VALVE AND SEAT SERVICE - 31. valve and seat service. figure 31-1 identification of the parts of a valve. figure 31-2

FIGURE 33–5 A drill is often used to remove weight from the crankshaft to achieve proper balance. - Figure 33–1

What event causes the pulmonic valve to open? - . the p wave an increase in the pressure within the right ventricle

Variable Valve Timing - . variable valve timing design and theory. as the rpm of the engine changes the “ideal” valve