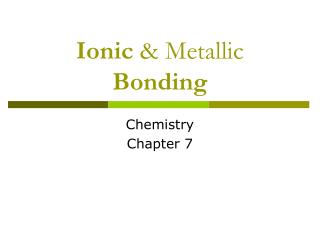 Review of Chemical Bonding - . metal and non-metal. non-metals only. metals only. types of bonding. atoms can be joined

Ionic and metallic bonding! - . just to let you no: delocalised electrons are the same as free electrons.

Metallic Bonding - . sea of free floating valence electrons not attached to any one atom free to move properties:

METALLIC BONDING - . results from the attraction between metal atoms and the surrounding “ sea of electrons”. in