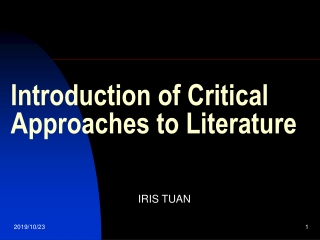 Introduction of Critical Approaches to Literature Introduction of Critical Approaches to Literature

Introduction to Narrative Poetry: The Odyssey - . ms. woodhouse (this power point is a mixture of an online power

The Epic Poem - . the epic poem. a long, narrative poem that celebrates a hero’s deeds came into existence as spoken

Characteristics of an Epic - . from the odyssey to star wars —a formula identified by joseph campbell in the hero with

What is an Epic? - . in literature, an epic is a long narrative poem about an epic hero and the hero’s journey. the

KEY LITERARY AND VOCABULRY TERMS - . epic a long narrative poem that recounts the actions, adventures and travels of a

What do I need to know about EPIC LITERATURE before I read The Odyssey? - . as we go through the information in this