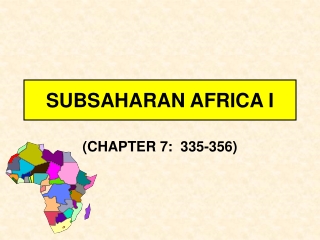 NSF-funded Research Collaborations with SubSaharan Africa - . presented at a workshop on “enhancing research and

SUBSAHARAN AFRICA I - . (chapter 6: 264-285). major geographic qualities. a plateau continent that is physiographically

KfW’s Approach to Development Finance in Subsaharan Africa - . christian dörner, kfw “the role of national and