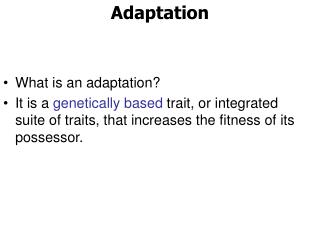 Adaptation. What is an adaptation? It is a genetically based trait, or integrated suite of traits, that increases the fitness of its possessor. What is adaptation. Adaptations come about in response to a problem. That is, it is achieved through the process of natural selection .

ADAPTATION - . terms related to adaptation. a trait that improves a population’s reproductive success is an adaptation

Planned Adaptation to Climate Change in the Coastal Zone - . same coastal management with new lens:. no different than

Emotional Adaptation and the End of Economics - . peter a. ubel, m.d. center for behavioral and decision sciences in

Studying Adaptation: Evolutionary Analysis of Form and Function - . experimental manipulation of traits one can isolate