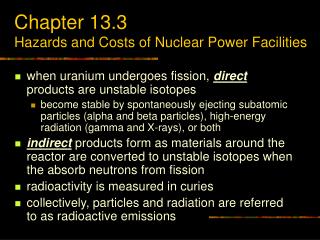 Revision of Unit A3 Hazards - . part 1. the next 4 weeks: hazards. key idea 1: some places are more hazardous than

Workplace Hazards - . identification and avoidance and the role of iso 18000/14000. workplaces can be hazardous. why

Protons for Breakfast Do we need Nuclear Power Week 6 - . november 2013. in the event of rain and flooding…. in the