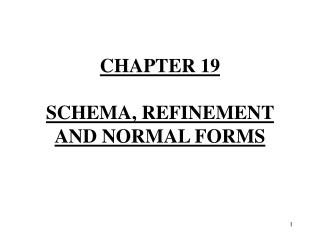 CHAPTER 19 SCHEMA, REFINEMENT AND NORMAL FORMS. INTRODUCTION. Having defined all the relational schemas that we want in our database, the next step is to refine them for so as to (near)optimize them with respect to (memory) space and time (of response to queries).

The Evils of Redundancy - . redundancy is at the root of several problems associated with relational schemas: redundant

Stepwise Refinement - . a program design strategy where a solution is first described in terms of high level functions,

Schema Refinement - . chapter 19 (part 1) functional dependencies. the evils of redundancy. redundancy is at the root of