What is Matter - PowerPoint PPT Presentation 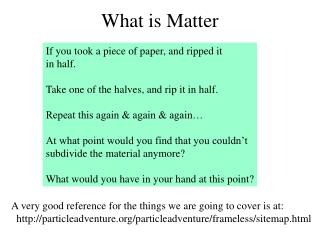 What is Matter. If you took a piece of paper, and ripped it in half. Take one of the halves, and rip it in half. Repeat this again & again & again… At what point would you find that you couldn’t subdivide the material anymore? What would you have in your hand at this point?.

Matter - . matter is any substance that has mass and occupies volume. matter exists in one of three physical states:

Introduction to Matter - . what is matter? what kinds of matter are out there?. matter. matter. anything that has: mass

Chapter 1 Introduction: Matter and Measurement - . chemistry:. the study of matter and the changes it undergoes.

Matter - . chemistry 332 o’dette. what is matter?. anything that has mass and takes up space all matter is made of

Boat Challenge - . scientific principles. matter. matter is everything around you. matter is anything made of atoms and

States of Matter - . solids. matter. the state of matter tells you whether a material is a solid, liquid, or a gas.

Magic matter - . by chris. matter no conjuring or destroying. matter can never be created or destroyed. matter changes

Matter and Change - . unit 2. chemistry is the study of matter and the changes that take place with that matter. matter

MATTER - . true/false quiz. matter must have mass matter must take up space air is matter matter can be in different

Matter Class #1 - . ob: we will determine what matter is, what are the phases of matter, and describe physical properties