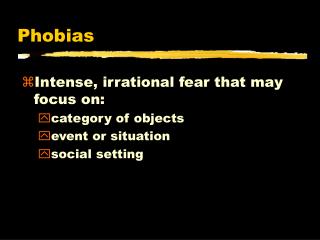 Phobias. Intense, irrational fear that may focus on: category of objects event or situation social setting. Study of normal anxieties. 100 90 80 70 60 50 40 30 20 10 0. Percentage of people surveyed. Snakes. Being in high, exposed places. Mice. Flying on an airplane.

Phobias - . what are they? do you have one?. phobias. - an anxiety disorder characterized by an intense, excessive, and

Phobias - . by: paolo santos. my recording!!!. these phobias were all found on

Systematic Desensitisation - . phobias. what is a phobia? an exaggerated fear of an object or situation the fear is

Welcome - Adult ii couples class. welcome. discoverjoy.com. do you have any phobias or fear of anything? . adult ii

Treatments: Treating phobias with systematic desensitisation - . a2. what is a phobia?. with a partner write down your

How might a cognitive psychologist think about phobias and OCD? Could perceptual processes be different in people that