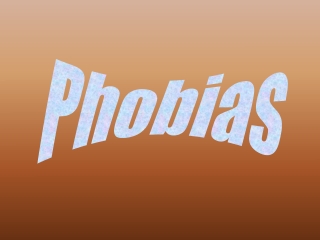 Top 10 List of Strange Phobias and Fears | Sehat.com - A fear, by definition is an extraordinary and regularly

The Evolutionary Theory of Phobias - . bats - evaluate the behaviourist theory of phobias (c+) - outline and evaluate the

What Is A Phobia? - . a phobia is an irrational fear , a kind of anxiety disorder in which there is a relentless dread of

PHOBIA and FEAR - . done by alpheson and chenglei. phobias. almost everyone has an irrational fear or two. some get

Phobias - . phobia: the persistent &amp; irrational fear of an object or situation. phobias are an anxiety disorder