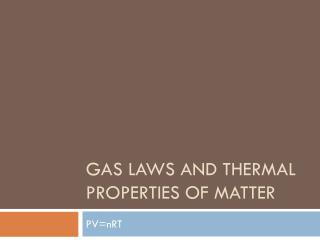 Gas Laws and Thermal properties of matter. PV= nRT. Equations of State. State Variables – Variables that describe the condition or state a material is in (macroscopic) Ex. Volume, Pressure, Temperature Equations of State – shows the relationship of different state variables

Chapter 11 States of Matter: Liquids and Solids - . contents and concepts. comparison of gases, liquids, and solids

Gases and Gas Laws - . introduction. the properties of gases will be introduced along with five ways of predicting the

What is Chemistry? - . the study of the properties of matter and the changes that matter undergoes. what is the modern

Objective 4 - . the student will demonstrate an understanding of the structures and properties of matter. 7. science

Introduction to Chemistry - . matter : is anything that has mass and takes up space. properties of matter . chemistry is

X-ray Interaction with Matter - . electromagnetic radiation interacts with structures with similar size to the wavelength

PROPERTIES OF LANGUAGE - . language is dynamic: change is a matter of fact and not a symptom of decay unfolding of

States of Matter - . chap. 13. gases. state of matter in which particles are separated by large distances. gases. gas