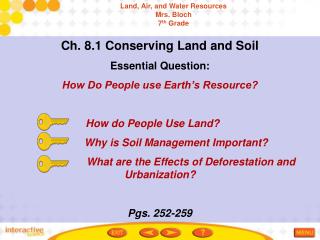 Land, Air, and Water Resources Mrs. Bloch 7 th Grade. Ch. 8.1 Conserving Land and Soil Essential Question: How Do People use Earth’s Resource? How do People Use Land? Why is Soil Management Important? How Do People Learn? - . jeff froyd, texas a&amp;m university. &quot;there is an incredible evolution of learning

Section 1: How We Use Land

How do people use and impact the environment? - . chapter 8, lesson 2. in this lesson we will. observe how pollution

Conserving Land and Soil - . conserving land and soil. less than a 1/4 of earth's surface is dry land. except for the

How do people learn? - . jeff froyd, texas a&amp;m university. pre-workshop analysis. on one side of a piece of

Why and how people use R - . john d. cook m. d. anderson cancer center www.johndcook.com. what is r?. open source

Essential Question: How do local governments obtain and use revenues? - S e c t i o n 4 state and local taxes and

Unit 4: Land and Resource Use - . chapter 11 agriculture, aquaculture, and the environment. agroecosystems. are

How do people use and impact the environment? - . in this lesson we will. observe how pollution affects plants identify

How People Use Energy - . unit f chapter 4. ch 4 lesson 1 fossil fuel use. fossil fuels are fuels that formed from the

How do people use an Interface - . lecture # 4. user interface design?. design is solving a problem design is creating an

Land Use - . are y’all city folk or country folk?. there are two types of land that we live in. urban: mainly covered

Land Use - . control of unreasonable land use * deprive use or value of adjacent land hi * physical vs. “intangible”