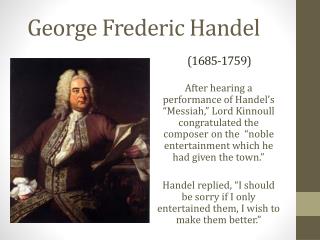 (1685-1759). George Frederic Handel. After hearing a performance of Handel’s “Messiah,” Lord Kinnoull congratulated the composer on the “noble entertainment which he had given the town.” Handel replied, “I should be sorry if I only entertained them, I wish to make them better .”.

frederic Remington - . 1861-1909 canton, ny. raised in new york. known as a troublemaker always making jokes did not do

Handel - . and the glory of the lord . learning objectives. to know the dates of the baroque period and to name popular

Handel - . close analysis and cadences. cadences . a cadence is a type of musical ending. it’s like a full stop or

George Frederic Handel - . presented by shaun oaks. overview. i have chosen to present on handel because i grew up

Frederic Chopin - . the genius of the music of the nineteenth

George Federic Handel - . “cosmopolitan”. the beginning:. born on february 23, 1685 to georg and dorothea handel. his