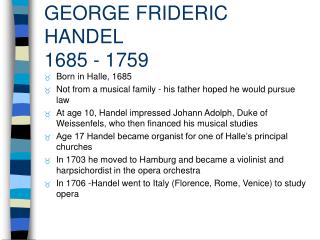 GEORGE FRIDERIC HANDEL 1685 - 1759. Born in Halle, 1685 Not from a musical family - his father hoped he would pursue law At age 10, Handel impressed Johann Adolph, Duke of Weissenfels, who then financed his musical studies Age 17 Handel became organist for one of Halle’s principal churches

George Frideric Handel: Messiah as an Oratorio by Roy Chan Date: December 1, 2008 - . “handel is so great and so simple

General Music - . day twenty . bell work how to. always label you bell work with the date. you may use the same page for

BAROQUE MUSIC - . unit 3 part one. bell ringer. what does the term “baroque” mean?. composers of the baroque period

Baroque Music (1600-1750) - . monteverdi, lully, purcell and the origin of opera vivaldi and the concerto grosso ( the

Johann Sebastian Bach - . j.s. bach worked at different times for nobility and the church. he never moved far from his

Gorge Frideric Handel - . by eliza. gorge f rideric handel. his life. gorge was born in hell germany he has a dad.