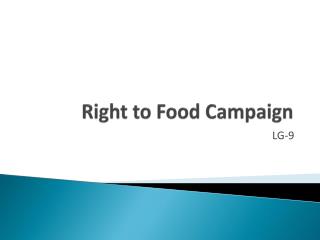 RIGHT TO FOOD - . fr. james mascarenhas ,s.j. some startling facts. india is a very fast developing country, true but the

The Right to Food Case - . key issues: converting all existing schemes into entitlement making the right to food a

The Right to Food in India - . the food security scenario in south asia. some indicators for child wellbeing and

The Right to choose clean food - . food standards and regulation. food is everyone’s issue. consumers are

Right to Food A Global Perspective - . by susan randolph and shareen hertel. global hunger. between 1970 and 1995,