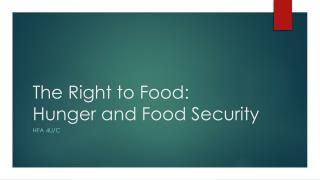 The Right to Food: Hunger and Food Security The Right to Food: Hunger and Food Security. HFA 4U/C. Ted Talk: Idea’s Worth Spreading. http://www.ted.com/talks/josette_sheeran_ending_hunger_now. Key Questions:. How far reaching is hunger? How can hunger and food insecurity be eliminated? What are the widespread causes of hunger?.

The Right to Food: Hunger and Food Security

Sustainable Livelihoods for Food Security and Good Nutrition: the Role of Food and Agriculture - . alexander müller

Food Wastage &amp; Hunger - . in the world today:. we produce enough food to feed everyone but 1 in 7 are facing

Option Topic: Global Hunger - . overview. 1. famine affects the health of individuals and communities why is global

Politics of Food: Food Policy - . hfa 4u/c. learning goals:. distinction between food as a right and food as a commodity

IS YOUR FOOD SAFE - Food is an important component of daily life, but if not taken hygienically, can lead to food

Chapter 18 - . the digestive system. functions of the gi tract. motility : movement of food through the gi tract.