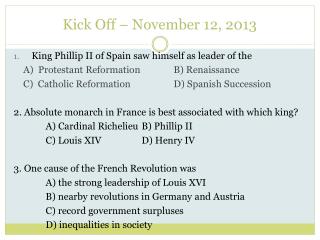 Kick Off – November 12, 2013. King Phillip II of Spain saw himself as leader of the A) Protestant Reformation B) Renaissance C) Catholic Reformation D) Spanish Succession 2. Absolute monarch in France is best associated with which king? A) Cardinal Richelieu B) Phillip II November 12, 2013 - Take 2 – biosolids strategy modifications for the city of raleigh to take advantage of technology

October 14, 2013 Kick Off - . imagine you are pope paul iii. you are upset by the actions and heresy of the protestants.

Kick Off October 2, 2013 - Which key term/person matches the description below? wife and co-ruler of justinian trade

Kick Off September 30, 2013 - . define the following words on your notecards: william the conqueror (p. 388) domesday