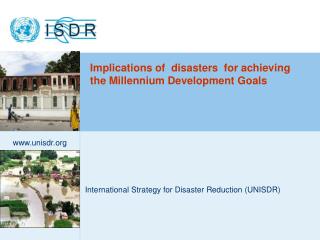 Implications of disasters for achieving the Millennium Development Goals. www.unisdr.org. International Strategy for Disaster Reduction (UNISDR). WHERE DO WE STAND?.

Aim: To critique the definitions given for ‘disaster’ - . read the following images / newspaper headlines. are they