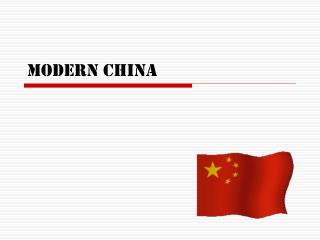 China Colonialism to the Modern - . objective 1: summarize the history of china. objective 2: explain the difference

Religion in Modern China : Chau; Fan &amp; Whitehead - . “reclaiming and refashioning their traditions in order to

Technology Growth of Modern China - . terry thomas. important facts. after the establishment of the people's republic in

Establishing Modern China - . a little bit of history…. the chinese were the first people to invent:. gunpowder

Establishing Modern China - . qing dynasty. what factors contributed to the downfall of the qing dynasty? overpopulation

An Overview of Modern India (and China) - . historical background for the white tiger. india’s geography. located in

Aim/Goal: Why do modern Chinese consider themselves to be “people of the Han”? Do Now: Complete “Connections to

A Comparison of Traditional and Modern Chinese Music - . by: rebecca dubois december 14 th 2009. the beginning of music.