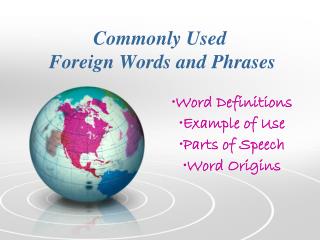 Commonly Used Foreign Words and Phrases. Word Definitions Example of Use Parts of Speech Word Origins. Why should we study foreign words?. FRY PHRASES and SHORT SENTENCES FOR REPEATED READING PRACTICE - . first 100 words. the people . by the water . you and i

The First 900 Most Commonly Used English Words - . taken from: the reading teachers book of lists, third edition, by

The First 600 Most Commonly Used English Words - . taken from: the reading teachers book of lists, third edition, by

Fry’s First Set of Word Phrases - . the people. you and i. what did they say?. one or two. how many words?. sit down.

EXPOSURE OF FOREIGN EXCHANGE RISK - . foreign exchange exposure is the sensitivity of the real domestic currency value of