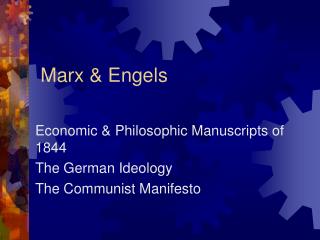 Karl Marx: “The Father of Communism” - . future marxists at an early age: lenin and stalin. socialism according to

Karl Marx and the Rise of Communism - . what is communism? who is karl marx? what was marx ’ s “ perfect ”

Karl Marx &amp; The Communist Manifesto - . “religion is the opiate of the masses.”. what does this mean?.

Karl Marx - . hijo byeun. who is karl marx?. karl marx was born in trier in 1818, just after napoleonic wars. his

- Karl Marx &amp; Friedrich Engels - “what the bourgeoisie therefore produces, above all, are its own

Marx - . philosophy. i s best known not as a philosopher but as a revolutionary communist, whose works inspired the

Karl Marx and the Communist Manifesto - . karl marx. born in germany wrote in england inspired by 1848. are the smurfs