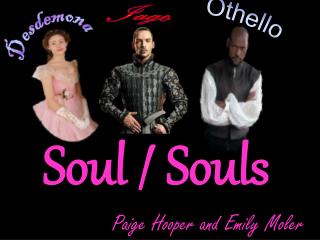 Iago. Othello. Desdemona. Soul / Souls. Paige Hooper and Emily Moler. Soul noun the spiritual part of humans regarded in its moral aspect, or as believed to survive death and be subject to happiness or misery in a life to come A Meeting of Souls: - . a heuristic inquiry into transpersonal experience in therapeutic relationships. anissa chung.

SOUL - Solus christus www.salvation123.com. “ what do you think makes up a person or what composes a human being ?”

SOUL INSTALLATION - . step-1 for this please install the version 7.0 or sql server 2000 or onwards. step-2 (database

Zombies Bodies without souls - . a corpse that has been raised from the grave and animated most closely related with

Ghosts Souls without Bodies - . a manifestation of an individual after death that remains in the vicinity of the

Soul Care - . a key component of spiritual leadership is helping others tap into what nourishes their soul… learning to

“Souls on Board” - . since homeland security has reserved the use of the word “sovereign” for use by the de facto

Soles For Souls - . by: holly. walking to school. imagine walking over 6 km to school every day… shoes are often

Ghosts, Souls and Death - . human universals: every culture has a concept of soul , and an after life, but… death is a

Missing souls at blackrock - . who are w e?. the company. high tower baseline : “ t he sky isn’t the limit” usp’s