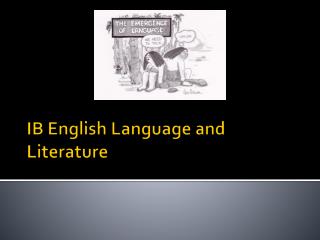 IB English Language and Literature . Starter task. Try to ‘read’ these texts . Think about as many aspects as possible Be prepared to share your ideas with the group. Different text types…just a few. advertisements appeals biographies blogs brochures cartoons diaries editorials essays

LANGUAGE IN LITERATURE - . bbl 3207. what is literature?. literature, as an art, is surely to arouse “the excitement of

The Impact of Multimodal Texts on the Development of English Language Proficiency By - Shashi nallaya. acknowledging the

Department of Chinese Language and Literature - . my feeling about

IB Language &amp; Literature assessments - . for those who missed the open house at the beginning of the year, need a

English A Language and Literature - . paper one standard level. paper 1. you are given two texts. choose one of them and

VCE English Language - . course introduction. essential questions. what is language? how can we use language to